More progress has been made on the new Big Payback album!

This weekend, we had two more six-hour sessions with Landon at Blast House Studios. We wanted to get the tracking 90% finished with these sessions. The main focus was getting all the horns recorded, and we ended up accomplishing that and more!

We had 5 songs on the docket for the horn session on Friday, and we hit the ground running. For our first album, Overture, we had put all four horns in the same room so they could stand side-by-side like a live show. We tried something different this time around. For editing purposes, we isolated each horn player in his own cage... err, booth. I don't think it diminished the sense of ensemble between the musicians, and it gave us a lot more flexibility when seeking the best take from each player.

Present at the sessions were Jamie Kember (our fearless leader) on trombone, David Buss on bari and alto saxes, Tony Barba on tenor sax (and a clarinet solo!), and Eric Siereveld on trumpet and flugelhorn. We ended up finishing the first day of recording ahead of schedule, with only 4 full songs remaining to knock out the next day. 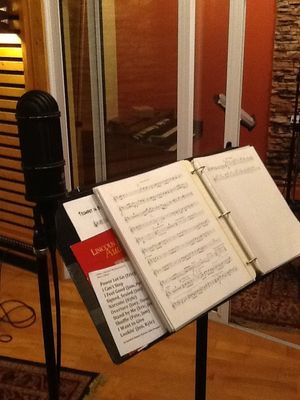 The trumpet book, complete with an old setlist and a pamphlet about the history of Lincoln High School in Manitowoc. Because why not?

The second day of recording also went smoothly, with only a slight hiccup. A rescue operation. Basically what happened was... I got locked in the bathroom. Something got stuck in the innards of the door locking mechanism, and it's thanks to the ingenuity of Landon and Tony that I'm even here today to type this story! They had to slip a screwdriver under the door so I could take off the handle from my end. My ordeal lasted all of 4 minutes, but it felt like... well, about 4 minutes. Always keep a screwdriver handy, I guess!

The horns finished up all their parts with time to spare. We also had time for Peter to lay down another solo on Fender Rhodes, Jeff to overdub a few bass parts, and me to take another crack at a guitar solo. We finished the day with background vocals on "Crosstown Traffic" and "Running with the Fire."

All that remains is lead vocals on I think 2 or 3 songs, and a smattering of backing vocals and aux percussion. Then it's mixing time!